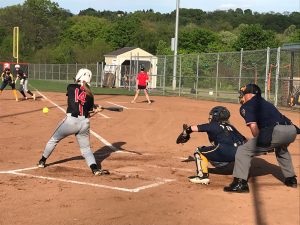 The Lady Panthers were looking for an upset in the fourth inning when Grace Swigart hit a two out single followed by a walk to Haley Beardsley. Maddie Andrejcik came through with a single scoring Grace from second base.  The Panthers led 1-0.

The Panthers extended their lead in the top of the sixth inning thanks to another RBI single by Andrejcik making the score 2-0.

However, in the bottom of the sixth inning NA’s Kristen Chomos hit a three-run homer to give the Tigers a 3-2 lead going into the seventh inning.  In the final inning, Audra Sapp of North Allegheny retired the Panthers in order to close out the game.

Although the Panthers lost, it does not take away from the tremendous year and the achievements they accomplished. They finished the season with a 13-7 record.