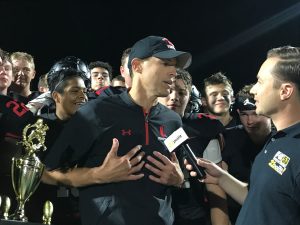 Upper St Clair boys varsity football played their first home game of the year against Baldwin. Thank you to the future of the program and cheerleaders for coming out on youth night.  The game also debuted the new facilities for most of the community.

Baldwin would open up the scoring but would miss the extra point, going up 6-0.  Upper St. Clair got the run game going in their second drive, going 64 yards on 9 rushes. The drive was capped off with a Jaden Keating 6 yard touchdown and PAT. With 9:05 left in the first half, Mateo Cepullio picked off the Baldwin QB and took it 60 yards to score. The pick six gave the panthers a 14-6 lead. The highlanders would answer and convert the 2 point conversion to tie the game. Baldwin would score again with just 25 seconds left in the half to go up 21-14.

But it was all Panthers in the second half. The defense, anchored by Brandon Shearer, Luke Banbury, and Ethan Hiester, wouldn’t allow the highlanders to score again, and held them to 14 yards on offense.  The panthers would tie the game when Ethan Dahlem dropped in a ball to David Pantelis for a 87 yard catch and run. With just 44 seconds left in the third quarter, USC took the lead when Ethan Dahlem scrambled 15 yards into the end zone. Dahlem would have another rushing TD in the fourth and the game final would be 35-21. The win moved the panthers to a 2-1 (1-1) record.

The Panthers face off against Woodland Hills next week at home for a 7:30 kick off. Great section win!!