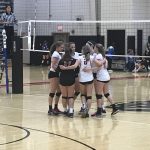 Congratulations to the Upper St. Clair Girls Volleyball team for finishing second in the USC Tournament on Saturday.  Twelve teams competed in a day long tournament in which the USC girls went 6-1.  After going 4-0 in poll play, they reached the finals after beating North Hills and Baldwin. In the final, they played a